But WHY an Armadillo?

In the recent heated resurrection of the f80v “armadillo” identification controversy, many new and old issues arose surrounding it. But in all the discussions, it became apparent to me that not everyone was aware of the basis for my reasons I favor the armadillo identification.

I didn’t understand this at first, because I had long linked my page of armadillo pictures and engravings, beginning with my first post on the subject way back in 2009, “Dating an Armadillo”. And then, I linked that selection, again, in my very recent post, “ANYTHING but an Armadillo”. But apparently some have missed those links, and therefore misunderstood many of my arguments pro-armadillo. This post is to rectify this oversight. Below are my “pro-armadillo” arguments, both visual and contextual.

The f80v animal is, by most people, quickly recognized as an armadillo. Why? Quite simply, it seems there is enough of a recognizable set of features. The curling posture, a defensive feature of the animals, is well known. They have scales. The snouts are slender, as are the ears on some species. Also, the snout’s tip is often represented with high nostrils, which I think might account for the Voynich artist drawing a slightly “upturned” orientation to the tip of the snout. Also note the ears are pointy, and the legs are short. Look below at this 1551 illustration from Conrad Gesner’s Historiae Animalium:

I’m going to return to this image in the “context” section, below. But the form is very close, although the artist’s style is obviously different. Where the f80v animal deviates is in the very poor representation of a tail, as it is somewhat “wispy”, and not the definitive “rat like” tail of real and illustrated armadillos. And the f80v animal was drawn without bands. But note that the scales on both f80v and the Gesner version are both seemingly drawn oriented in the wrong direction: with the curved portion facing forward. This is not seen on real armadillos, but is an error of representation on several early engravings. Here is another version with this reverse-scaling:

That is from a 1633 book, and I apologize for losing the reference. I will try to find it. But meanwhile, note the scale orientation, the pointy ears, the upturned snout, the short legs, and the overall proportions. I think that from just these two images, it is clear that the f80v animal fits well with a 16th and 17th century understanding as to how these creatures should recognizably be illustrated (and therefore, also, how a forger of a 16th or 17th century armadillo illustration should represent one), and adding the oft-described defensive curling would be the “icing on the armadillo” (a lemon meringue, usually, I understand. Sorry). Here is another representation from the 16th century:

I had noted that this is from the 1593 book Aromatum, et Simplicium Aliquot Medicamentorum Apud Indos Nascentium, and also appears in the 1579 Simplicium medicamentorum ex Nouo Orbe delatorum, quorum in medicina, both by Nicolás Bautista Monardes. This version is different than the others on some points, such as scale representation, but still: In overall proportion, slender, upturned snout, short legs, and pointy ears, this animal is both very similar to the Voynich image, and also immediately recognizable as an armadillo. The next image is from a 1592 map of the New World, in Library and Archives Canada, item # NMC 8142:

He is a bit heftier than the f80v animal, with a thicker snout. And the scales now seem to be oriented properly… although it is unclear if bands are being represented. And the snout is not upturned at the tip. But still he has the general proportions expected and seen in others, and in the f80v animal. Further, perhaps, but still I think a good comparison. And in any case, I do not think this is the source of the f80v animal, because of those differences.

A point here, before I go much further: This post is about the “why of it”: the reasoning behind the armadillo. For all the previous decade plus arguments AGAINST the armadillo, see my post ANYTHING but an Armadillo. If you have a new objection over those, or a “pro” comment that has not occurred to me or others, I would be interested in hearing it below.

Expectations and practices of the Voynich Artist:

As I also pointed out in “ANYTHING but…”, objectors to an armadillo identity have claimed that the Voynich artist was either too good to draw it so badly, or conversely, so lacking in talent, that they would not have drawn and armadillo “this good”. That is, they would have either drawn it better, or worse, but not like we see it. Or, it is said, those are not scales, but fur, and not ears, but horns. But the thing is, we do not have to guess at these things: we have clear examples, elsewhere in the Voynich, as to how the artist drew various animal features, and the level of their talent.

So for the question of whether or not the f80v animal is representing scales? We have two scaled animals which compare closely to the f80v animal, showing the VMs artist meant “scales”:

So from these images alone, it is obvious the f80v animal has scales. If they meant “fur”, as many have suggested… such as seen on wolves, sheep, and other animals, then we also know how such a feature would have been drawn by the VMs artist:

And there are other examples in the Voynich, telling us how the artist represented these features, and more: How they drew ears, and horns, and eyes, and so on. And I cannot resist pointing out how Voynich himself treated these features, in his own drawing of a cat:

Similar to the above argument, also covered on my page “Anything but…”, it has been suggested that a person “of the time” (meaning, “15th century”) would or would not have drawn a thing this way, or that way. But however others might have so drawn the animal, in ANY time, is irrelevant, because we have the Voynich right in front of us, telling us exactly how they DID draw these things.

But what about the context?

And then, it has been claimed (“Anything but…”) that there would be NO reason for an armadillo to be in a forged Roger Bacon manuscript. That is true, there probably isn’t a reason for that. But the thing is, nobody I know of makes that claim, and I certainly don’t.

In my 1910 Voynich Theory, I hypothesize that the Voynich Manuscript was first created, about 1908 to 1910, as a Jakub Hořčický botanical. I think it was meant to look like it was written by the man claimed to have signed it, that is, “Jacobus Tepencz”, while he was chief botanist and physician for the Holy Roman Emperor Rudolf II.

And further, I believe the “primer”, or guide, for creation of this forgery, was the 1904 Henry Carrington Bolton work, Follies of Science at the Court of Rudolf II. This is a sometimes informative, but more often wildly inaccurate, although always colorful representation of the last years of the Court of the Emperor. It is a fun read, but far from a history lesson. It was a best seller in its time, and gave a great many people a skewed vision of life in the Court of Rudolf. And Wilfrid Voynich was no exception… he was a real fan of this very popular work, even telling others that he “knew it by heart”.

The list of comparisons to mentions in Follies, and those things noted in the Voynich, is tremendous, and a subject for another blog post in itself. But for the sake of this this post, I note Hořčický is one mention… as is his brother (???) “Christian”, and his “City Pharmacy”, with many New World… American… plants and medicines, which supposedly lined his shelves.

Voynich himself made private note of almost all the names in “Follies…”, listing them in order. It has been suggested to me that he did this to try and ascertain the origins of “his” Roger Bacon manuscript, that is, to discover “who” may have brought the VMs to the Court of Rudolf II. Possibly. But I posit, on the contrary, that Wilfrid’s list is highly suspicious, especially considering the above mentioned great number of similarities between the manuscript, and that “Follies…”. It is a “chicken/egg” problem, to be sure… but with those comparisons, I would say, “Follies” is more the chicken, and the Voynich ms., the egg. That is, I believe that Wilfrid Voynich did research the names in “Follies…”, but in order to include in his work many items he thought might appear in a manuscript herbal by the Court botanist.

Which brings us back to the Conrad Gesner armadillo, shown above. I had long noted that his armadillo engraving was probably the closest representation, in style and spirit, to the f80v animal. The pointy ears, the upturned snout, the look and orientation of the scales, and so on. I had thought this, in fact, before reading Follies of Science at the Court of Rudolf II. So one is welcome to dismiss this as just another of many troubling coincidences, but the very book this armadillo is from, is mentioned in Follies, on page 212:

“… the ‘German Pliny,’ Conrad Gesner, Professor of natural history at Zurich, whose ‘History of Animals,’ published in 1551, is the basis of all modern zoology…”

And there is a further supporting reason why an armadillo might appear in the Voynich, if a forgery meant to appear as a Rudolf Court production, as I contend: All the great minds of the early 17th century in Europe were quite fascinated by “all things New World”. Their “Kunstkammers”, or “Cabinets of Curiosities”, and much art representing those collections, there appear many New World artifacts, plants and animals, as they were very desirable. The armadillo is no exception. Here is the Musei Wormiani Historia of 1655:

Note the stuffed armadillo hanging up on the right. There is another armadillo on a shelf to the left, in this illustration of the Museo Cospiano. I found this and other images on this page of seven different collections, and I think there are at least four armadillos between them: 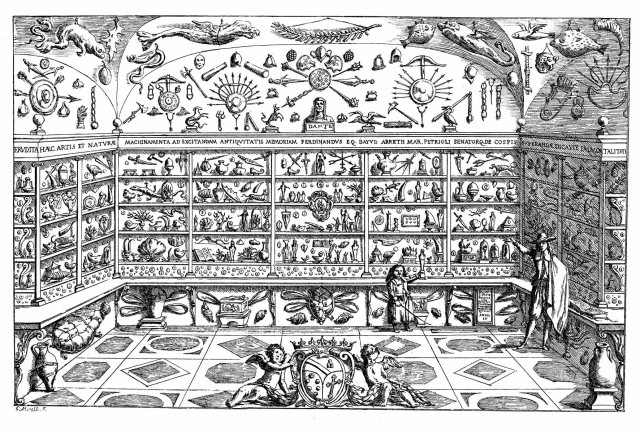 So there is a clear case to be made for the use of an armadillo in the Voynich, as explained in my own hypothesis. It has a very good reason to be there, as it would be completely appropriate… actually, expected… in a work meant to represent the Court of Rudolf II.

Mention must be made to the various New World Voynich theories, most of which do accept that the f80v animal is an armadillo, of course. I do think that a great many of the comparisons used in these theories, of plants, animals, and text, to New World sources, are actually correct. It is just that given all the other comparisons made, that deviate from “New World”, many of which are grossly anachronistic to the radiocarbon dating of the calf skin of the Voynich (comparisons up to 1909), I feel the New World content of the Voynich was by influence only, and penned in modern times.

This post does not go into the great many other reasons I feel are supportive of my 1910 Voynich Theory, nor does it claim the armadillo identity is the only pillar on which to base my theory. It is only one of a great number of observations, by me and others, which clearly show that that the Voynich (as a 15th century genuine manuscript) is rife with anomalies and anachronisms, which never get properly explained; nor are any appropriate, let alone better, substitutes offered, in any reasonable overall context.

19 Responses to But WHY an Armadillo?