As I and others have said before, the labels seem to be one of the best ways “into” the Voynich Manuscript. They might be words which are disclosed by adjoining illustrations, most importantly. And if they can be assumed to be encoded/enciphered in the same manner as the rest of the Voynich, then they limit the possible methods used to do so… by the number of letters, the structure… and the fact that there is an “infinite space” before and after them. One would then have to explain how the space applies to the main text… as a character or symbol… when it cannot, ever, in the labels.

But the T/O maps of the Voynich seem to give us additional possibilities. The reason is, we have two with labels to compare. I believe this is unique in the Voynich, where we have a “word” which can reasonably assumed to have the same meaning as the same word elsewhere. The maps I am referring to are the two left ones in the below illustration.

The actual, known, 1472 T/O map to the right is of course in it’s usual “East up” orientation (thanks, Nick). The Rosettes map is, in the Ms., but I rotated it to line up the labels with the F68v3 map, and to make them more readable (can we use that term, “readable”, in the VMs?). For the sake of this discussion, certain assumptions are being made: That these are T/O maps in the Medieval style, and the segments are meant to represent the same places, and that the words within them, therefore, are meant to represent the same place/idea. Let’s look at the upper left word, first, and compare them.

If we look at these two “words”, and assume they are meant to be the same place or idea, certain points would follow. First, comparing the gallows, it would imply that these should not counted elsewhere as two gallows… that the second version is simply the same character drawn with a more closed upper left loop. Secondly, since the right word is seemingly a shortened version of the first, it implies the use of abbreviations. The importance of determining whether or not abbreviations are used at all in the Voynich can not be underrated. And thirdly, the fact that the fourth character of the right word is different from the fourth, fifth or sixth characters of the left, would imply that it somehow signifies the same meaning of those characters, where missing.

In the second comparable VMs word, we find the same and some new implications. First, the first character of the right word is actually a combination of the first two characters of the left word. There are several reasons this makes sense… for one thing, it includes the rare gallows with the crossed tail. This increases the possibility that it is representative of the left word.  Another reason that it follows the right character is a combination would be, again, the small area it is written in. One would expect a nice clean spacing of characters in a larger space, and the possibility of accidentally, or judiciously, linking them where necessary… and this is exactly what we find. A second major observation here is that the word in the smaller place, as with “Africa”, is also the shorter word. The first four characters are the same, and again, just like Africa, again, the last is different… implying, again, and abbreviation for space reasons. Now the fifth character in the left word may be a shortened tail “9”. If so, it might imply that such “o’s”, with short tails, are the VMs “9’s”, when written within a word. Only guessing there (as in the rest of this post of course, only guessing). But another possible is similar to the Africa example… that is, that the “9” character here is meant to represent the last characters of the left word, and have the same meaning… or, simply, to denote that an abbreviation has taken place.

This is only musing, given the rare but possible opportunity to compare two words which may have the same meaning in the Voynich. I don’t know of any other two words which can be compared in this way, in fact. If so, the implications are important:

… for to so closely represent the same idea, or place, on two different maps on two different pages, with so similar words, shows an attempt to convey real meaning. There would be no need to make them as alike as they are, if there was no meaning to the words… and the odds are, if randomly chosen, they would be very much more different from what they actually are, and in ways different from what their situation implies and supports. Of course and unless, this was on purpose, just to confound… but then, it would be the only situation where this was necessary to do, as again, it is our only comparison! What are the odds of that? Not for me to say… 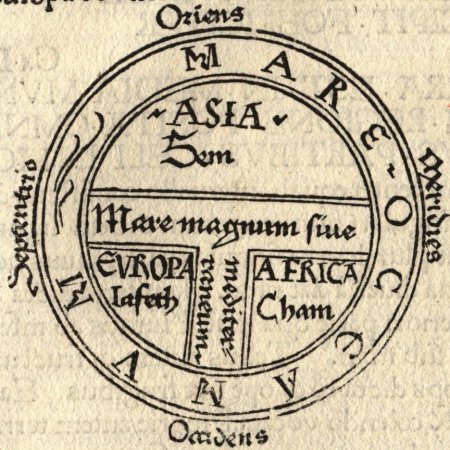 Like Loading...
This entry was posted in codes and ciphers and tagged cipher, code, t/o map, voynich. Bookmark the permalink.